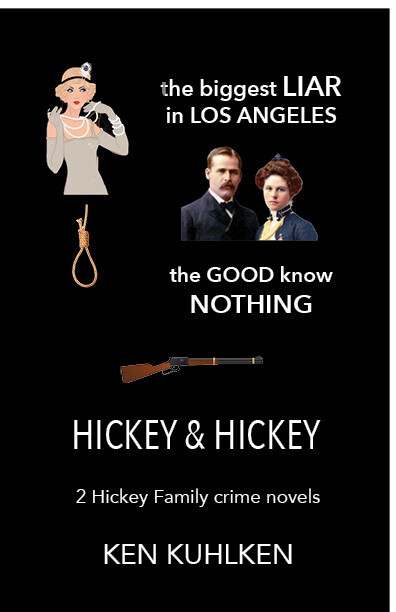 Books One and Two of the Hickey Family Crime novels, signed first editions in the original covers from Poisoned Pen Press or new Hickey and McGee trade paper editions. Your choice.

(L.A. 1926) Unless a famous evangelist will take agnostic Tom Hickey into her confidence, he may never learn if the Ku Klux Klan lynched his friend. San Diego Book Awards Best Mystery.

The Good Know Nothing.

(L.A., Tucson, and McCloud, CA. 1936) Author of The Treasure of the Sierra Madre, an outlaw who may be the Sundance Kid, and publishing magnate William Randolph Hearst stand between Tom and the truth about the disappearance of his father.

During the summer of 1936, destitute farmers from the Dust Bowl swarm into California, and an old friend brings L.A. police detective Tom Hickey a book manuscript, a clue to the mystery of his father Charlie’s long-ago disappearance. Tom chooses to risk losing his job and family to follow the lead, though even his oldest friend and mentor, fellow detective Leo Weiss, passionately opposes Tom’s decision. Los Angeles Book Festival Best Mystery Award.