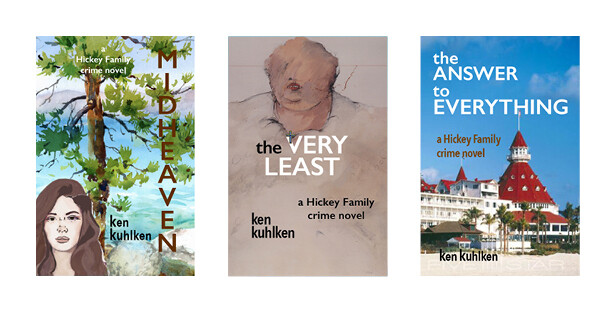 Offered here in trade paper, the three book set that together becomes Hickey and McGee is at once an epic love story and a saga of crime, corruption, faith, madness, and extreme courage.

The parts of the story are:

Midheaven, a coming-of-age drama set in and around the exquisite Lake Tahoe basin, told by Jodi McGee as a precocious seventeen-year-old. Disenchanted by her wealthy and jaded peers, she both turns to God and falls for a troubled man.

The Very Least, which begins when a dear friend of Clifford Hickey’s cousin Bo crosses the San Diego/Tijuana border on the run from a charge of molesting children in a church nursery. Because Bo believes him innocent, journalist Clifford agrees to investigate. Soon he has made mortal enemies of gangsters, politicians, and tycoons on both sides of the border. That’s the bad news. The good news: he meets Jodi, who helps him discover his purpose and write this story.

the Answer to Everything, a novel of suspense and courtroom drama that finds Clifford’s brother Alvaro implicated in the murder of a Tijuana drug cartel gunman. The cartel mark the entire Hickey family, and Jodi and her daughter, as objects of their fierce code of revenge.

Readers won’t forget Hickey and McGee’s unique yet genuine people or the lessons about the trials and power of love expressed through their rich and turbulent lives.